Voyager IP keeps Celtic Explorer connected, wherever they are

Never a day offline since moving to Voyager IP….even operating as far as 25 degrees west, Voyager IP continues to provide the Celtic Explorer with reliable communication links at the extreme end of traditional VSAT coverage areas, into the mid-Atlantic and beyond…

We’re delighted to announce our new partnership with Ekahau, the global leader in wireless network solutions.

Wi-Fi is at the frontline of the onboard experience but a fast, reliable wireless network across a vessel is a complex challenge. Poor Wi-Fi can be caused by several issues that include ‘dead zones’, signal interference, signal to noise ratio and channel utilisation.

The Ekahau brand is trusted by some of the world’s biggest brand names like Google, Microsoft, Netflix, Cisco and Dell, to keep their wireless networks performing as they should.

Up until now, locating and fixing the problems of poor Wi-Fi onboard ship could be notoriously tricky, according to Mark Elliott, managing director of Voyager IP.   “There’s a world of difference between a good internet connection and good Wi-Fi.  Wi-Fi is like electricity onboard ship, in that if it’s not working to the best of its ability, it makes little difference who or what else is. Not only can poor Wi-Fi cause frustrating downtime and outages, but it also has a negative impact on the performance and reputation of a vessel that’s available for hire or charters.”

Using Ekahau’s professional grade Wi-fi diagnostic software and tools, Voyager IP can quickly identify the root cause of the problem and suggest the fix, with minimal disruption to the ship’s day to day activities.  “In the majority of cases, once the problem is identified, the solution to fixing a wireless network issue can be frequently cost-effective and easy to implement,” Elliott continued.

Several clients have already benefited from the Ekahau service with Voyager IP. It was employed at the planning stage for the 41-metre Dynamiq GTT 135 Stefania to identify the optimal position and configuration for the yacht’s Wi-Fi access points.  For the Celtic Explorer owned by the Marine Institute of Ireland, Voyager IP surveyed and mapped the existing network and the results were used to maximise its performance.

Commenting on the new partnership, Steve Litzow, SVP Global Sales for Ekahau, said “We are thrilled that Voyager IP’s customers now have access to professional-grade tools to build and maintain high-performing Wi-Fi networks, a critical element of today’s marine business infrastructure. Ekahau’s tools will enable Voyager IP’s customers to plan, validate, analyse and troubleshoot their Wi-Fi networks faster and easier than ever before to keep business running smoothly.”

MY Ragnar, destined for incredible voyages, supported by Voyager IP

We’re proud to be the chosen provider of a suite of communications to the explorer yacht the MY Ragnar, which like its namesake, the legendary Norse warrior king, is imposing and fearless, a radical makeover of a former icebreaker.

The 68.2 metre luxury explorer is the first LY3 Superyacht rated Ice Class 1A Super, able to operate in temperatures as low as -35°C and maintain a speed of four knots in ice over half a metre thick.  It will mix luxury surroundings and top-class communications from Voyager IP with hardcore exploration capabilities, and it offers the promise of incredible journeys out of reach of other superyachts.

Mark Elliott, managing director, Voyager IP, “We’ve been working with Richard and his team for several years on other boats. The Ragnar project is very special, so the team and I are extremely proud that the communications for such a unique vessel has been entrusted to us.”

For the project, we chose to work with IEC Telecom to provide the necessary communications to ensure the MY Ragnar is compliant with international safety and security treaties and codes.  This includes the management of the LRIT system, the SSAS and Inmarsat C. We will also be providing a global VSAT service for onboard communications for crew and clients as it navigates and enjoys some of the more extreme routes in the maritime world.

Gwenael Loheac, CEO Western & Southern Europe at IEC Telecom: “It is a very inspiring project. On the basis of Inmarsat FX, our team developed a customized solution to meet the specific requirements of this majestic vessel. By enhancing the VSAT set-up with IEC Telecom’s value-added services, Ragnar’s crew and guests will be able to enjoy a higher bandwidth and better user experience no matter how far their journey will take them.”

MY Ragnar’s captain Rob Lancaster said, “Ragnar is destined to travel to some of the most remote and exciting spots on earth so expertly managed communications and tracking systems are vital for the safety and enjoyment of my crew and clients.  I’ve been working with Voyager IP for several years and I know I can trust its team to have my back no matter where we are.”

Voyager IP  is proud to support the Irish Naval Service and the HSE in the fight against Covid-19, by implementing a secure cellular connection on board several INS vessels moored around the country. The INS is providing aid to the civil authorities by utilising operational naval vessels as testing centres for the virus.  Voyager IP’s managing director Mark Elliott said, “We have implemented a solution that enhances information and data transfer to ensure that the coordination of testing operations is managed using secure and effective communications to support the HSE and other organisations at the frontline of fighting the coronavirus.” 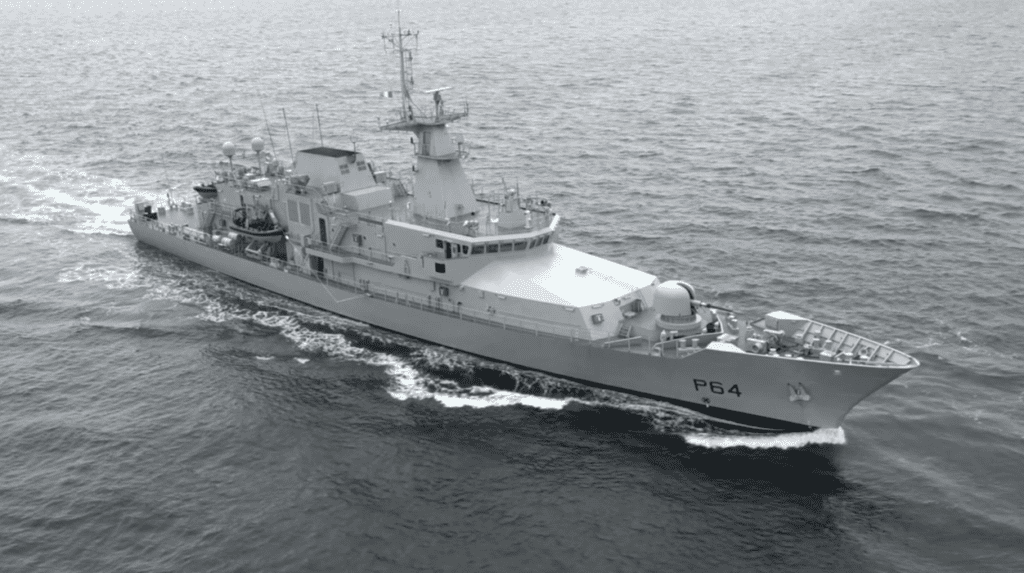 Delighted to announce that our office in Cobh, Co Cork, will be providing RF, IT and AV technical communications support to the Irish Naval Services fleet, including the newest addition, the P64 LE George Bernard Shaw, pictured. With a great breadth of in-house expertise, our Cobh office is ideally positioned to support the ever-growing communications needs of the Irish Naval Service and the thriving port of Cork.

Mark Elliott, managing director, Voyager IP (3rd row from front, white shirt) with scientists and research vessel operators at the kick-off of the EU H2020 Eurofleets + project.
Voyager IP is delighted to be a partner in the EU H2020 Eurofleets + project, for which it will be providing recommendations on standardising communications aboard the largest advanced research vessel fleet across Europe, Greenland, USA, Canada, Bermuda and New Zealand.

Mark Elliott, managing director, Voyager IP, said “The typical communications challenges facing such a large research vessel fleet are centred around the different systems and platforms they use.  Voyager IP will be helping the fleet to manage those challenges by offering a standardised communications solution with the required resilience and links to optimise the connectivity of the fleet onshore and afloat.”

The Marine Institute in Ireland is the coordinator of Eurofleets+, which includes a consortium of 42 marine institutes, universities, foundations and SMEs from 24 countries across Europe, North America and Oceania, with funding of €9.9 million. It follows on from the success of two previous Eurofleets projects.

Establishing a strategic roadmap and sustainability plan, Eurofleets+ will extend and enhance the capabilities of the European research vessel infrastructure, bringing new perspectives, new ideas, and new research and innovation tracks that will be beneficial to all. The project will prioritise research on sustainable, clean and healthy oceans, linking with existing ocean observation infrastructures, as well as supporting innovative ideas, working closely with industry.

More information on Eurofleets+ is available on www.eurofleets.eu.

What do charter clients complain most about?

It’s not the food, the décor, the size of the bedrooms or the staff.  A recent survey by Voyager IP revealed that the top client charter complaint is the lack of a fast internet (VSat) connection.

Tripp Hock, captain of the MY Amore Mio said, “It’s an absolute necessity to have good, stable, fast internet on board.  While many other issues relating to the operation of a yacht can go unnoticed by the guests, there is no way to hide a frustratingly slow VSat connection at sea.”

The captains were also asked if the availability of a fast internet connection is now more important than ever before, in terms of securing client charters.  Tripp Hock responded, “Absolutely, and the primary reason for this is the shift in TV content delivery. Those yachts which are not using a stable and reliable Ka VSat service are going to be impacted as guests continue the move from satellite TV to streaming content.”

All those surveyed rated reliability as the most important aspect of their Ka VSat service from Voyager IP. Sergey Nikiforov, captain of the Galactica Plus commented, “Aside from social media and entertainment, our clients demand frequent access to business and financial news. Our internet connection must be stable and reliable, with upload and download speeds comparable to on-shore providers, and backed up by great support whenever we need it. “

Ka technology differs from the traditional Ku band satellite internet in that instead of a large ‘footprint’, it uses multiple spot beams to provide overlapping coverage. Voyager IP, partnered with Telenor, offers the Ka service with lower bandwidth costs than those of the Ku and C band service currently on the market.

Nick Allen is the fleet manager for Rix Shipping, operators of crew transfer vessels to the offshore industry. He commented, “While not always the first concern, clients expect proper communications when they have a vessel on contract and they assume this will be like a shore side connection. Therefore, it is important to have a service in place that meets that expectation.”

Tripp Hock added “In more than three years with Voyager IP as my VSat service provider of choice, I can both recommend to others and take comfort myself that my guests’ data appetites will be satisfied!”

Finding a clear view on the differences of KA Band and KU Band is not easy. VSat providers offer a lot of content online about which is better. While KA has a bit of a buzz surrounding it, in some cases, it may not be the best solution for you! Check out our comparative infographic here! END_OF_DOCUMENT_TOKEN_TO_BE_REPLACED

An innovative scheme by marine broadband solutions company Voyager IP will change the way customers can keep track of their VSAT and IT support services.